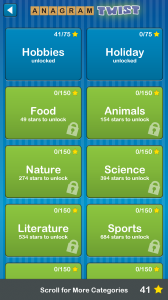 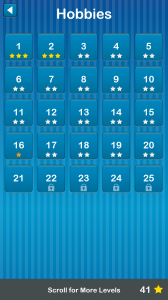 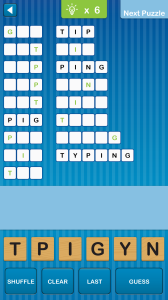 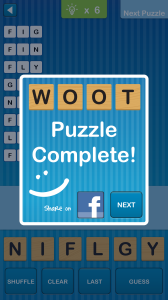 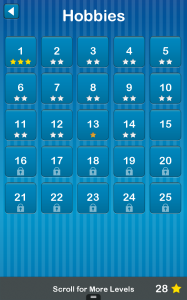 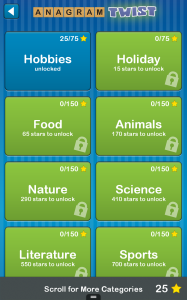 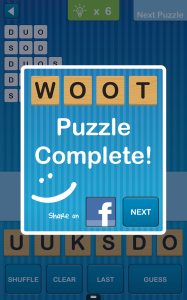 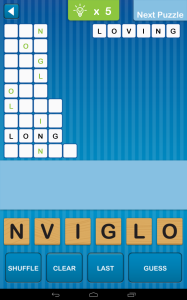 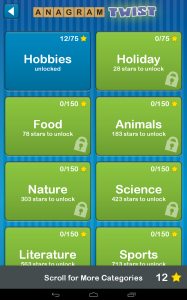 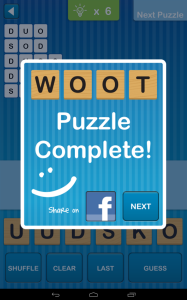 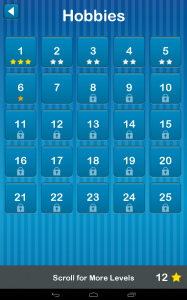 Los Angeles, California – Today OmNom Apps released their most popular application, Anagram Twist, for the Android OS. Anagram Twist continues to delight users of all skills and backgrounds with a clean and fun word-gaming experience.

In Anagram Twist, players must figure out words that can be created as a result of six tiles with letters on them. Players unscramble and jumble these tiles around to come up with words. They receive stars for attempting a puzzle, figuring out the target six letter word, and discovering the rest of the words in each puzzle. Anagram Twist features numerous categories and dozens of puzzles to keep players’ word sleuthing skills sharp.

Anagram Twist for Android comes complete with everything in the iOS version of the application, and then some.

Stars have been incorporated more into the game to allow players to unlock additional content. A hint system has also been integrated that players to more easily figure out difficult words.

To date, Anagram Twist has been played by hundreds of thousands of people around the globe. It has been described in the App Store as both “Fun and addicting,” and a game that “keeps my family and I together trying to figure it out.”

Anagram Twist is available now for Android users running 2.2 and higher. Get it now on Google Play.

In Spy Words, players find themselves in the role of investigators and code breakers. Here, they are given an encoded phrase to decipher. Substituting the correct letters for the ones jumbled in the puzzle, players must determine what the correct phrase is. Phrases are taken from popular culture and fit within a variety of categories including wisdom, food, and comedy. Players also have the ability to use hints which reveal all the cases of a particular vowel. The fewer hints used on a puzzle, the more one will get in return.

“I think people will find Spy Words challenging but not too hard. It just has the right level of difficulty to make it fun for both casual and hardcore gamers. This is the kind of game that players will find hard to put down because once you’ve solved a single puzzle, the feeling is really rewarding, and makes you want to play more,” says Nick Delos Santos Jr.

To celebrate the release of Spy Words, OmNom Apps is giving players, who download the application now, the ability to score a free puzzle pack filled with 25 new puzzles.

Spy Words is available now for iPhone™, iPod™ Touch, and iPad™ users running iOS 4.3 and higher. Get it now in the iTunes App Store.

Anagram Academy builds off of the previous success of Anagram Twist with an extremely comprehensive SOWPODS word list, four levels of difficulty, and competitive gameplay.

As Co-founder, Tony Ngo, described, “We took everything we learned from Anagram Twist and our users to produce a very comprehensive and manageable game. The final result is great fun for players of all ages that will keep them entertained for hours on end.”

Players shuffle and arrange letters to spell out as many words as possible in two minutes. After getting the six-letter word, players are able to move on. One of the many challenges in this game comes from deciding whether to stick with the current puzzle or move onto the next to get a whole new set of tiles.

Each word increases a player’s score with longer words worth more points. At the end of two minutes, the game is over and players have the option of posting their score to Game Center. Players are also encouraged to beat their personal record and to challenge their friends.

“With the release of Anagram Academy, the guys at OmNom Apps have created something that I feel people want more and more of–they’ve made a game that’s mentally stimulating, quick to play, and challenging enough that they won’t get bored too quickly,” says Patrick Tomas.

To celebrate the release, OmNom Apps is giving players, who download the application now, the ability to get tokens free–more than enough to beat a few friends with ease.

Anagram Academy is available now for free for iPhone™, iPod™ Touch, and iPad™ users running iOS 3.0 and higher. Get it now in the iTunes App Store .